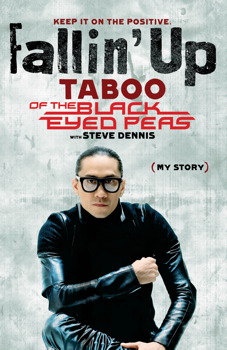 Falling Up: My Story is the Autobiography of Jaime Luis Gomez. That name may be unrecognizable to the general public. Why? To the world Gomez is known as the rapper Taboo. He is one fourth of the world renowned group, the Black Eye Peas. His autobiography goes deeper than the average story of achieving a childhood dream, and flourishing in one of the most difficult industries out there.

Falling up is a story of introspection, and overcoming self destruction. It’s about a boy who was fortunate to have a grandmother who constantly uplifted and cheered on his dreams. Instead of diluting them with reasonable doubt, she empowered him.

Taboo opens up on how he felt like a “misfit” as a child. He tells the history of the Black Eye Peas through his perspective. He details how fate brought the four together to rise from humble beginnings, like living with fellow Pea member Ap.de.ap in a roach infested apartment, to selling out arenas around the world. Taboo had to figure out how to become a loving father in his late teens, when his own father was not around.

Taboo’s writing is vivid and stimulating, it showcases his endearing sense of humor. It’s a story if a man who had it all and came close to losing it to alcohol and drugs. Ultimately it’s about a man who owned up to his faults and came to terms with his past before he destroyed his future.