An “Invitation Only” screening of the new documentary Farmland, which examines and presents the perspectives of several next generation American farmers and ranchers, was recently held at the Historic Douglass Theatre. It was one of only a few “premiere” events of its kind held around the country to publicly introduce the film directed by James Moll. The acclaimed filmmaker is best-known for Holocaust documentaries The Last Days, which won an Oscar; and Inheritance, which profiles the daughter of Amon Goeth, the Nazi concentration camp commandant from Schindler’s List. 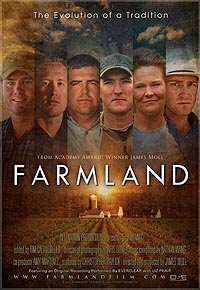 One of the six subjects of the film is Leighton Cooley, a fourth-generation poultry farmer from Roberta. Cooley operates four farms with his father, and also has a cow-calf operation and hay growing enterprise, all of which are in Crawford County.

Most Americans never think about where the food they eat comes from, but by the end of the film a viewer has a good sense of several things. Farming is not an easy life, but hard work with long hours. Many times variables beyond a farmer’s control, including the weather and markets, determine his or her success with a crop. Farmers, especially family farmers who work farms for multiple generations, care about their land, livestock, and crops.

Farmland was funded by the U.S. Farmers & Ranchers Alliance (USFRA), a trade association uniting industry representatives from groups such as the National Cattlemen’s Beef Association and the United Soybean Board, state farm bureaus, and the agribusiness corporations Monsanto, DuPont Pioneer, and John Deere. Because of this funding source, critics of the film consider it as the group’s response to health-based entries like Food, Inc. and King Corn. (Godfrey Cheshire on RogerEbert.com calls the film “…a glossy corporate infomercial for American agribusiness.”)

There is reason to be concerned. According to an article recently published in The Guardian entitled, “Corporate Stranglehold of Farmland a Risk to World Food Security, Study Says,” small farmers are being squeezed out as mega-farms and plantations gobble up their land.

The article states, “The world’s food supplies are at risk because farmland is becoming rapidly concentrated in the hands of wealthy elites and corporations, a study has found.”

“Small farmers, the UN says, grow 70% of the world’s food but a new analysis of government data suggests the land which they control is shrinking every year as mega-farms and plantations squeeze them onto less than 25% of the world’s available farmland, says international land-use group Grain. These mega-farms are less productive in terms of amount of food they produce per area of land, the report argues.”

And what of Farmland? It’s obvious that the young farmers featured in the film believe in what they are doing, are successful in their businesses, and remain dedicated to their customers, lifestyle, and heritage. They are vibrant farmers, noble professionals, and evidence that the small family farm in America is not yet dead.