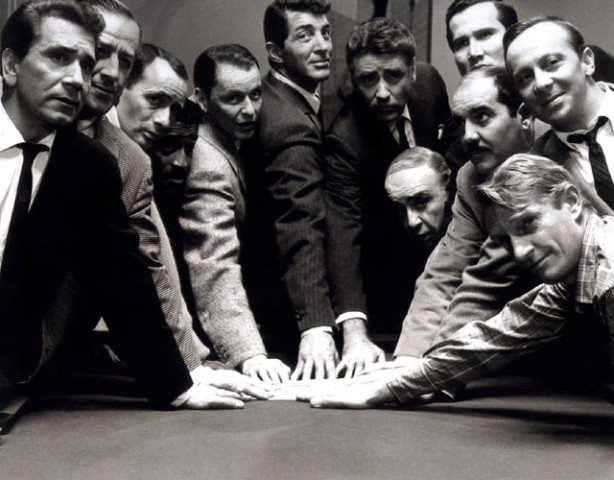 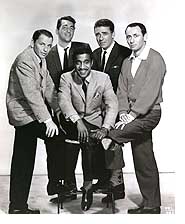 In the early 1950s, Frank Sinatra and his crew had been a part of the Holmby Hills Rat Pack, a Hollywood drinking group that gathered around Humphrey Bogart and Lauren Bacall. That group also included Judy Garland, Sid Luft, Swifty Lazar, Jimmy Van Heusen, David Niven and Kay Thompson.

When Bogart died in 1957, Sinatra took over. Most of the original members quit and the new group formed around Frank’s friends, Dean Martin, Joey Bishop, and Sammy Davis, Jr. Peter Lawford joined later. On the fringes of the central group were others like Shirley McLaine, Angie Dickinson, Juliet Prowse, Tony Curtis and Janet Leigh (the women were never official members of the Rat Pack).

The Rat Pack came to prominence in January 1959. That year Sinatra conducted the orchestra on Dean’s album Sleep Warm. The film Some Came Running with Sinatra, McLaine and Martin opened. And Sinatra joined Dean onstage at the Sands for the first time. It would become a routine. And they would become legend in Las Vegas.

Sinatra changed the name from Clan to the Rat Pack when Sinatra was courting the Kennedy clan in 1960. Kennedy came to see them perform at the Sands and was royally entertained by Jack Entratter and company. The Pack sang the national anthem to open the 1960 Democratic National Convention in Los Angeles, which nominated Kennedy for President. They christened their Sands performances Rat Pack Summits in honor of the Kennedy-Kruschev Summit.

Ocean’s Eleven, the Pack’s film legacy shot in Las Vegas in 1960, perpetuated the Rat Pack manner. It was about 11 army buddies from World War II who plan to rob five of the biggest Las Vegas casinos. They all had parts. Sinatra produced the movie and starred as Danny Ocean, the mastermind of a five-casino heist carried out with his World War II buddies.