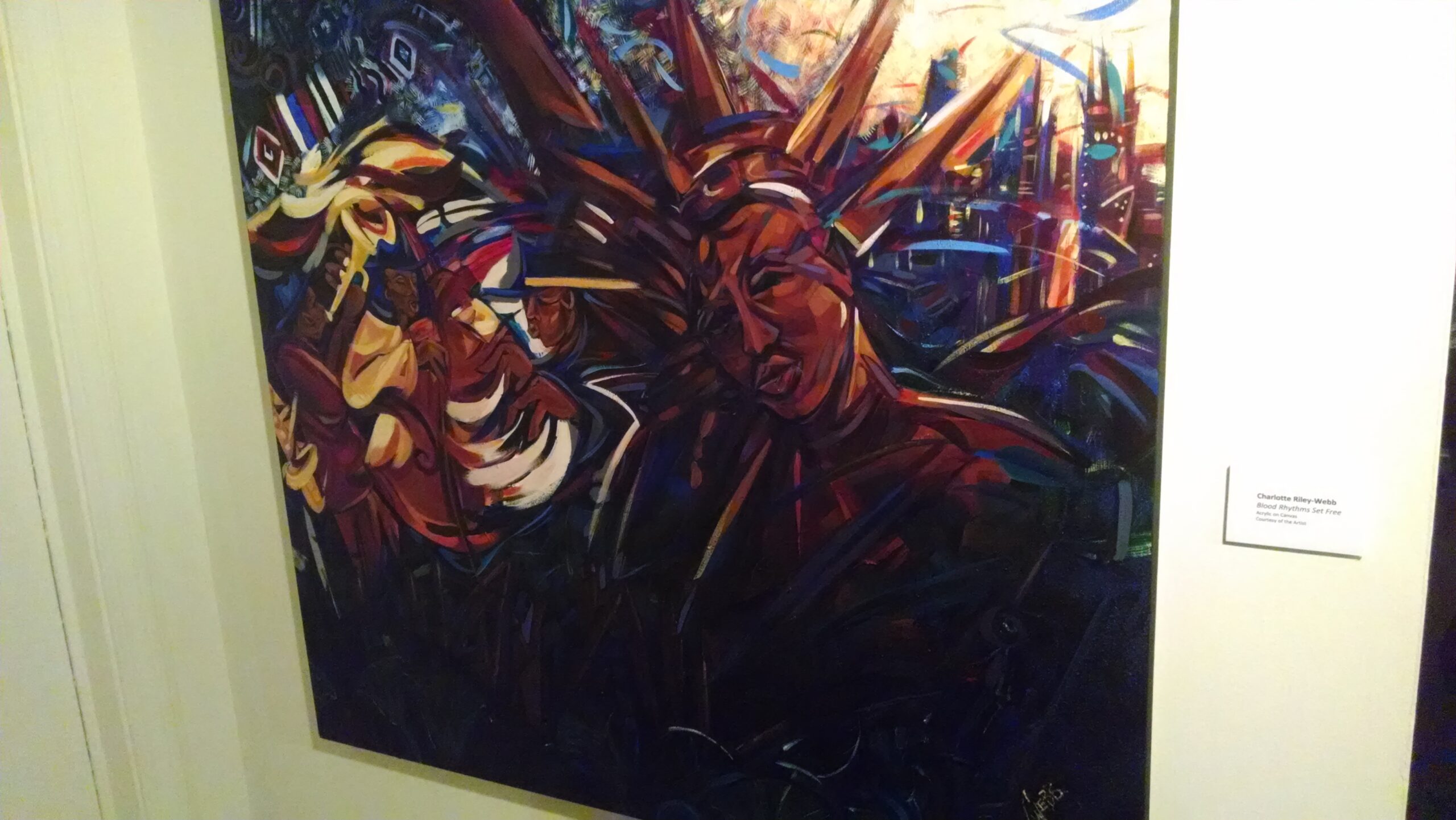 Astounding. Amazing. Strong. These were the words describing the works as a new exhibition of an acclaimed painter debuts at Tubman Museum.

The collection—entitled Blood Rhythms, Strange Fruit—is that of Atlanta based painter and art educator Charlotte Riley-Webb, on display at the museum now through June 28. Riley-Webb is an accomplished artist with works in numerous private and corporate collections and whose works have traversed the globe turning up in galleries and museums across the U.S. and along the way gracing art institutions in England, South America, the Caribbean and West Africa according to Tubman officials. Riley-Webb also has public art commissions installed in Atlanta; Hampton, VA, and Shreveport, LA.

The 22 paintings in the Tubman exhibition are inspired by the writings of poets Ntozake Shange and Tzynya Pichback, and the music of legendary singer Nina Simone. The exhibition occupies three rooms and made its debut in Macon during the opening. Riley-Webb draws from the spirits, works and lives of Shange, Pichback and Simone as sources of inspiration she said during her gallery tour and talk. An attentive and passionate diverse group of art enthusiasts stood shoulder to shoulder as Riley-Webb shared her climb to the top and how the exhibition came to be. Prior to the artist taking center stage Tubman curator Jeffrey Bruce welcomed those in attendance before bringing on Riley-Webb with stirring details of her accomplishments and how he came to know  the artist.

Riley-Webb jump started the tour and talk by giving credit to her parents, who inspired her through their progressive outlooks on life; and dedicated the exhibit to her mother and grandmother for her vision and sacrifices. And then it was on! In between commentary on each piece, men, women and children could be seen taking in everything from a brilliantly colored collection of dancers to thought provoking images of the four little girls who died in the Birmingham church bombings of the 1960’s staring with sorrowful eyes in the foreground as confederate flags surround them in the backdrop. “This exhibition has been on my mind for the last forty something years and I was intent on doing it,” Riley-Webb revealed. “These people (Shange, Pichback and Simone) have been stored in the library of my mind for sometime now and I have been able to draw from them along the way.”

Following a spirited performance by the Atlanta based senior citizen theatrical troupe the Past Prime Players and the reggae tinged offerings of Dean Brown prior to Riley-Webb’s tour and talk, Macon based visual artist DeWayne Kendrick and others could be seen absorbing the exhibition. Kendrick admitted to feeling a connection to Riley-Webb and her works. “We need to support each other. We get each other. We get our dreams and expressions,” said Kendrick. “Another artist can see what another artist is trying to accomplish.” Twenty-two year old Mande-Kan Mendes of Macon said she was highly impressed. “She is really good at interpreting history and capturing the struggle of African-Americans,” she expressed. “But it (exhibition) shows our victories as a people as well and that’s important also.”

To learn more about Blood Rhythms, Strange Fruit, call the Tubman at 478-743-8544 or visit their Web site at www.tubmanmuseum.com.