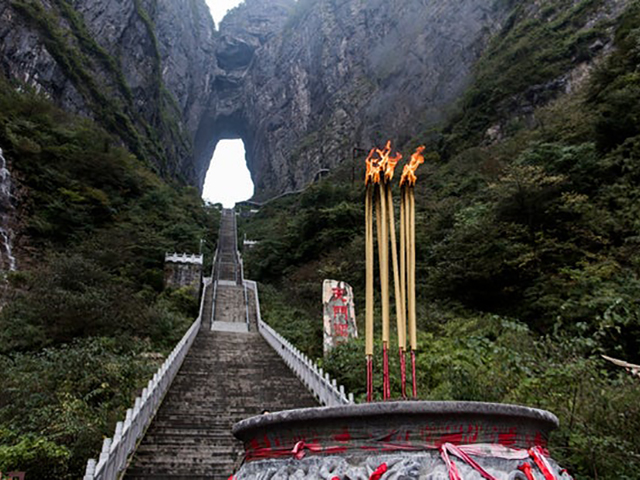 Commercials — You either gotta-love-them or absolutely-hate-them! Regardless of in which camp you belong, there’s an exceptional commercial along the Dragon Road and its 999 steps to Heaven’s Gate on Tianmen Mountain in China.

Surely, this commercial is in the gotta-love-them camp — and the short-form commercial can be seen now in certain regions around the world.

The commercial was produced and first aired in early 2018. There is a longer promotional version with informative additions of backstory footage that include a short bit of information about the local people, folklore, and culture. The expanded promo footage features Ho-Pin Tung, the pro racing driver of “The Dragon Challenge,” who guides the Range Rover Sport P400e up the staircase to Heaven’s Gate. From the top of the course, he states, “That’s steep!”

One tour bus driver laughs out loud when told that someone is making an attempt to ascend the steps by car — “It’s too crazy!” — and believes that it can’t be done, as do many other locals interviewed in the commercial. Phases like, “The road is alive” and “…deadly if you are not careful” and “It’s impossible” and “If he crashes he will die” are mentioned.

As Ho-Pin Tung takes off in his plug-in hybrid vehicle along the winding road of 99 turns to his ultimate goal, the video displays a short caution that reads “Closed area. Professional Driver, Do not attempt.”

Driver and car finally arrive at the bottom of the 45-degree-angled 999 steps and we hear, perhaps from the event’s project manager, “Everything is clear and everyone is out of the way.” After a nod of his head indicating that he is ready to proceed, Ho-Pin Tung begins this final leg up the staircase and rapidly disappears into the fog.

You have got to see this video posted by Land Rover:

If you’re wondering how driver and car get down the mountain, check out this article.

Best Practices For A Warrior In World Of Warcraft