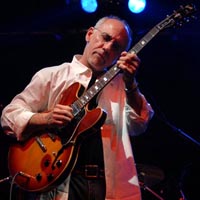 This article is an update of an earlier review of the Not-To-Be-Missed live music by the Larry Carlton Quartet, lead by the great guitarist and studio musician in concert. Enjoy…

Larry Carlton in Concert! No jazz enthusiast could experience a more talented and entertaining musician who captivates the audience with every strum of the guitar.

True to form, this crossover artist did not disappoint during a recent concert. The guitar virtuoso, who has performed and/or recorded with just about any big-name jazz, fusion or popular singer or musician you can name, and his “Quartet” gave an unforgettable performance.

Carlton began the concert with a couple of solo pieces, beginning with a flawless rendition of the The Lord’s Prayer

and Song for Katie

, before bringing out the Quartet: Dennis Hamm on keyboards, Derico Watson on drums, and Travis Carlton—his son—on bass. During the introduction, Carlton mentioned that Hamm had just returned from Africa, where he had to find a replacement keyboardist for Jonathan Butler before he could leave there to perform at this concert. Also, this was Watson’s first time appearing in concert with Carlton, though they had played a few numbers during a benefit several years ago.

A hand-written copy of the concert setlist, which now is a permanent addition to the Retrowarehouse LP collection, was obtained from Carlton’s road manager. It reads as follows:

On stage for about one hour and twenty minutes, the set ended with an encore, a performance of Sleepwalk

. The audience would have listened to the guys for another hour, because Carlton and the younger musicians were captivating! Check out the following video.

Larry Carlton is well-versed in many genres of music, including jazz, blues, jazz fusion, smooth jazz, pop and rock. He has excelled during an illustrious career that spans more than 45 years, evidenced by the 19 Grammy nominations to his credit (until 2014). Of those nominations, Carlton has won the Grammy award four times to date. He also is the recipient of many other jazz and guitar awards.

Carlton also received the George Benson Lifetime Achievement Award at the 2011 Canadian Wave Awards, was named One of the 10 Greatest-Ever Session Guitarists by Gibson, and Guitar Player magazine lists “Kid Charlemagne” as one of the Most Influential Rock Solos Ever.

Here’s some stills from the concert:

Unquestionably a brilliant and prolific artist in his own right, Carlton has been involved with a long list of musicians from around the world, but he has released many of his own albums while working on those of other musicians. His first, With A Little Help From My Friends, was released in 1968. His latest, Larry Carlton and Robben Ford: Unplugged, is a live set with famed blues guitarist Robben Ford, which was recorded this year in Paris.

For their collection, fans might add Carlton’s 1987 release, Discovery, to their collections. The album features the hit Minute by Minute, which was written by Michael McDonald. Notes about Larry Carlton on the cover read as follows:

“Perhaps more than another guitar player, Larry Carlton helped create and define the West Coast guitar sound of the 70’s, having played on over 3000 sessions and over 100 gold albums by such stars as Steely Dan, Quincy Jones, Joni Mitchell, Linda Rondstadt, John Lennon, Barbra Streisand, Neil Diamond and Christopher Cross. Larry’s talents stretched into television, garnering four Grammy nominations, winning with Mick Post for ‘Hill Street Blues.’ His soundtrack credits include ‘Against All Odds.’
After 13 albums with the legendary Crusaders and numerous Steely Dan sessions, Larry’s solo career has expanded his worldwide reputation as an artist/producer of great sensitivity and high standards…”

The original release was custom pressed on premium virgin vinyl by KM of Burbank, California and the album in the Retrowarehouse collection is in pristine condition—apparently almost never having been taken out of its jacket. The retail price of the sticker on the cellophane reads $8.59, but today this album will set a collector back much more, if he or she can find it!

Most of the songs on the album were written, arranged, and produced by Larry Carlton. Among the musicians recording with Carlton are Michael McDonald on keyboards and Kirk Whalum who performed the sax solos. In the notes, Carlton expresses thanks to Michael McDonald for giving him the “real thing” on Minute by Minute, other musicians for constantly making themselves available to enhance his sound, his children “for loving their Daddy and the musicians through another project,” and more.

Later releases of music by Larry Carlton in the Retrowarehouse collection are the CD versions of Fingerprints and Sapphire Blue—currently out of print—both of which were produced by Carlton. These items were recently scooped up at the bargain prices of $2.99 and $3.99, respectively.

If you’re a jazz fan, you don’t want to miss any chance to catch Larry Carlton in a live performance! In the meantime, checkout this mashup of some clips from the recent concert…