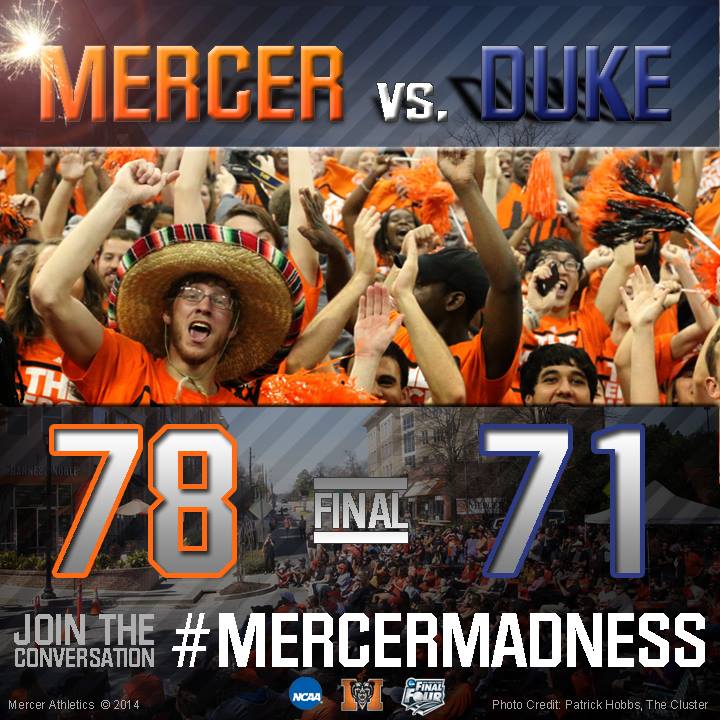 Mercer Bears historic upset of Duke was one of the most stunning in the 2013 NCAA March Madness Tournament. Even President Obama got it wrong. He picked Duke to be part of the Elite Eight. Mercer University, located in Macon, Georgia, was ranked as the 14th seed. Duke was ranked as the 3rd seed. This was Mercer’s third tournament bid. The last time Mercer played in the tournament was 1985. Friday was Mercer’s first ever win.

None of the above statistics had any effect on Mercer as they took to the court and systematically pick apart Duke’s. Mercer played like a team hungry for a win and a little respect. The Bears with their five senior starters simply played with more rhythm and cohesiveness than Duke. Mercer is the only team in the country to start five seniors in every game. They faced a hostile crowd in North Carolina’s PNC Arena which is just a short drive from Duke’s campus. Through it all Mercer kept playing. Even as Duke hit 15 three pointer, Mercer found a way to counter the attack. The Bears actually kept Duke from scoring for more than five minutes as the team wound down the clock. They keep Duke from getting inside, forcing them to shoot off balance and hurriedly. Mercer’s poise and assuredness carried them into the home stretch and then ultimately to a stunning 78-71 victory.

Mercer’s Coach Bob Hoffman said, “When we got paired with Duke, right from the beginning my wife told me, ‘They can be beat.’” Friday marked Coach Hoffman’s first time as a head coach in a NCAA tournament. “Everybody was calling us underdogs,” Hoffman said. “I told them before we ran out, let’s be super dogs. You guys have lived for these moments. … You guys have played in tough environments. You guys can get it done.”

Check out Kevin Canevari a senior guard for Mercer. He hails from Long Island, but graduated high school at Lake Norman in North Carolina as he celebrate Mercer’s shocking win with a dance. “I’ve been dancing all year after big wins,” said Canevari, which explains why he has busted out these moves only a few times this season: after winning at Ole Miss, after beating Florida Gulf Coast in the Atlantic Sun title game and, of course, after taking out the Blue Devils during Mercer’s first-ever NCAA Tournament win.