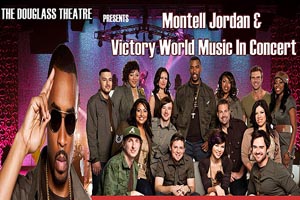 If you didn’t attend the recent Montell Jordan and Victory World Music concert at the Historic Douglass Theatre, you missed THE gospel set of the year.

Unbeknownst to many, Montell Jordan has always been involved in church ministry. He flourished as a church musician from the age of nine or 10, instead of being involved in athletics. One of his greatest musical mentors was the late Pastor Richard Stubbs, who trained Jordan and other kids in the church to play music by ear.

Jordan was influenced by great songwriters like Smokey Robinson and gifted musicians like Stevie Wonder in subsequent years. About his connections with music, Jordan stated in a recent interview, “Though I grew up as a church kid, I loved music that inspired and encouraged people regardless of whether it was church music or just music to make you feel good, so a lot of my inspiration revolved around musicians that just made people feel good.”

In 2010, he left a secular recording career to become a Christian worship minister and currently leads the worship team—Victory World Music—at the multi-ethnic Victory World Church in suburban Atlanta.

Check out the video above of Victory World Music’s rendition of “Great I Am” during their Douglass Theatre concert and check out the concert setlist below.

Let’s Go (dub step intro)
The One
You Are (radio version)
One Thing Remains (with Reggie Remix)
With Everything
Great I Am
The Anthem
Glorious
F.L.H.
Useable
Psalm 139 (with Scripture reading)
Beautiful Exchange
Break Every Chain
Shake Heaven

Here are some photos taken at the concert:

Fun Things To Do at Christmas

The Sound of Music