Just down the street from here, on a narrow block in downtown Macon, Georgia stands the remains of an abandoned building that carries a sign so conspicuous, it beckons the pedestrian to stop and take a closer look through the all-glass doors. If one didn’t look very closely, one would expect to see the place abuzz with singers and musicians bursting in and out of recording sessions and vans being loaded and unloaded with all types of musical instruments. But the reality for this little building is that it has seen better days&mbashin fact, its best days—and those days are from years gone by.

The building is so dilapidated that it’s almost too dangerous to enter. Most of the ceiling tiles have fallen from their supports, stucco that no longer adheres to the red brick is peeling away, and sections of the basement can be seen through the parts of the first floor that have collapsed. The rooms are dark and dank, with a faint scent of mildew in the air, but there is one item that serves as evidence that this is not just another abandoned building.

The moniker outside the front wall, Capricorn Records, gives the observer a hint about this building’s otherwise hidden history. Until the moment this clue is read, one cannot imagine who has ever passed through those rooms nor even wonder about the contributions they have made to the annals of music history because their presence in this place. 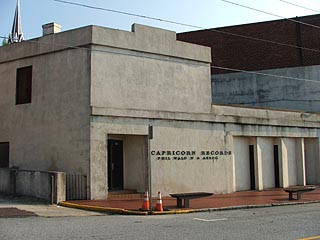 Long before it became a record label, Capricorn Records was formed in 1969 as part of the ATCO imprint by Atlantic Records producer Jerry Wexler

. Walden had forever dreamed of starting a record label and had hoped to establish a company with Otis Redding, but that dream ended with Redding’s 1967 death in a plane crash.

, a session guitarist under contract at Atlantic Records in the 1960s. Shortly after their meeting, Walden purchased Allman’s contract from Wexler, then he convinced Allman to form a group with his brother, Gregg. Capricorn Record Series, named for Wexler and Walden’s astrological sign, went from a struggling enterprise to a solid contender in the music industry with the establishment of the Allman Brothers Band

Capricorn Records finally became its own label in 1971 and was initially distributed by ATCO. That year, Rolling Stone magazine called the Allman Brothers Band’s double album, At Fillmore East

, “the finest live rock performance ever committed to vinyl.” The label grew and went on to record such famous rock bands and artists as the Marshall Tucker Band

The label’s prominence and influence in the industry declined after undergoing a number of moves from city to city (Macon to Nashville to Atlanta) and surviving being sold from parent company to parent company (Atlantic Records to Warner Bros. to Sony Music to PolyGram Records to Warner Bros. to PolyGram/Mercury to Universal Music). The label was actually eliminated by PolyGram Records in 1979 while the disco genre was dominating the music scene, but Walden resurrected Capricorn when he rejoined Warner Bros. in 1990.

Capricorn Records finally folded in December 2002 when Phil Walden sold the label to Volcano Entertainment, a Zomba Corporation subsidiary. There have been no new releases on the Capricorn label since 2002, when its remaining artists were dropped, transferred to Volcano, or moved to other labels.

It would appear that the rhythms here have long ago sounded their final beats, the musicians have moved on to bigger things, and the building has long been deserted, but the wall emblazoned Capricorn Records causes one to imagine that the buzz of music is still in the air. The little building on the narrow street in downtown Macon yet stands as a solid witness in testament to the glory days of Southern Rock.