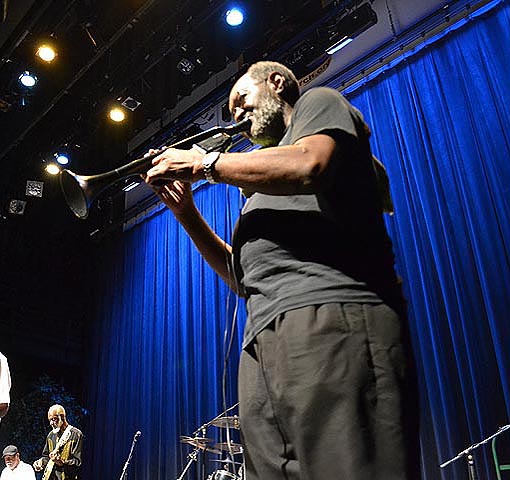 Any R&B music aficionado recognizes his name, especially if he or she is from Central Georgia. Like many gifted artists from the region, Newton Collier is a local talent that made his livelihood in the music business and, like many of his contemporaries, Collier’s professional story began when he was a teenager.

We first spoke with Collier while preparing for the Johnny Jenkins tribute events at the historic Douglass Theatre in 2013. At that time, Jenkins was being enshrined into the Theatre’s “Walk of Fame.” As part of the celebrations, Collier—one of several musicians who once traveled as part of Jenkins’ Pinetoppers band—joined other former band members on stage with his Yamaha digital horn to play many of their old tunes.

Newton Collier comes from a family of musicians and business owners that goes back generations. The “Silas Green Show” was owned by his grandfather’s brother, Charles Collier. His parents managed a group called the “Sweethearts of Rhythm” that at one time included actress Ruby Dee as a member. Also, Collier is related by marriage to theater owner Charles Douglass. 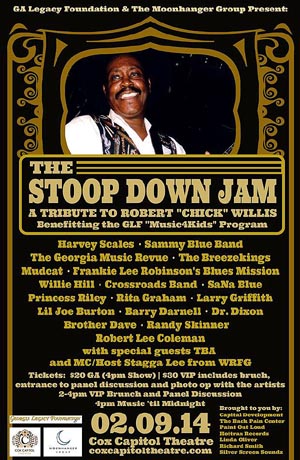 Following the example and guidance of his parents, Collier began playing piano at age six and the trumpet at 10. Soon after graduating from high school in 1963, he joined Sam and Dave, who are best known for their 1967 Grammy award-winning song “Soul Man.” He eventually went on to study classical music at the prestigious Berkeley College of Music, where he worked under the tutelage of several contemporary musicians like jazz great Pat Metheny.

Collier moved back to Central Georgia in 1988 and opened Collier’s Records and Tapes, specializing in rare and collectible albums, at Napier and Bailey Avenues. He ran that shop for 10 years before closing it, then worked around Macon until he retired in 2010.

Newton Collier rarely gives interviews these days as he relaxes, enjoys his retirement, and stays busy organizing and expanding the stamp collection he started building about 30 years ago. Also, he helps other musicians with management and booking issues and organizes tribute concerts like “Stoop Down Jam 2014” that honors Robert “Chick” Willis, who passed away in 2013.

During a recent afternoon’s conversation, Collier graciously imparted lots of information from his wealth of knowledge about the music industry and how it relates to Central Georgia. We’re honored that he took time out of his day to speak with Retrowarehouse.

1) How did you become a member of the Pinetoppers?

For a while, I stayed on Campbell Avenue in Tindall Heights with an aunt who lived across the street from Johnny Jenkins. I was very young and forbidden from going over there, but I could hear them practicing their music. Johnny knew my mother very well and when I was about 12 years old, he managed to convince her to let me go over and sit in to listen while he and the band practiced. I would listen closely and pay close attention to Sonny Goss, the sax player, and Sammy Coleman, the trumpet player who also was a member of the U.S. Air Force. Later, at home I would mimic their tricks on my trumpet and figure out the chords, then try playing with them when I returned the next time. Finally, when I was 13 or 14, Coleman was deployed to the field with the military and I was drafted to fill in for him at a fraternity gig. When I was old enough to go on the road, I traveled with the band on a tour that took us to Augusta, Washington DC, Halifax, Nova Scotia and Boston, then back to Augusta, and finally we returned to Macon. When I got home, I had a call to join Sam & Dave as their regular trumpet player.

2) Who influenced you the most in your career?

3) Who are some of the famous people you performed with on stage?

4) What was the most challenging thing about a career in the music business?

The long-term effects of constantly being on the road for long stretches and away from one’s family create hardships. You’re traveling to a different place every night, living in a different place from day to day. You learn to sleep in odd positions if you can at all and you learn to stay awake later than you want to because many times you have to be alert.

5) What would you tell someone interested in being a professional musician?

Learn the business of music. The business end is much more important than the playing end. Learn to control and budget your money. Go to school and become a learned musician and business person.