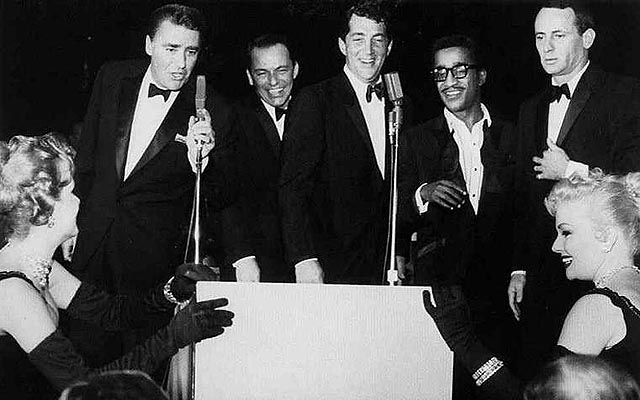 In the 1960s, the legendary Rat Pack—the most “hip” and famous members being Frank Sinatra, Dean Martin, Sammy Davis Jr., Peter Lawford, and Joey Bishop—created their own language.

It was a mixture of slang and cool terms that helped make them undisputably the ‘kings of cool’ in this the heyday of Vegas.

For a huge dose of their lexicon in action, don’t miss the next broadcast of their most famous release, Ocean’s 11, a 1960 heist film centered in and around Las Vegas.

bag a person’s particular interest; as in “singing’s my bag”

beard a male friend who acts as a “cover”; usually for extramarital affairs

beetle a girl who dresses in flashy clothes

big-leaguer a resourceful man who can handle any situation

bombsville any kind of failure in life; see ville

broad affectionate term for a girl or woman with sex appeal

bum a person who is despised, most frequently linked to people in the media

bunter a man who fails in almost everything he does; the opposite of gasser

charley what the rat-packers called one another

crazy a term of admiration for a personal, place, or thing; similar to cool.

creep a man who is disliked for any reason

crumb a person it is impossible to respect

dame a generally derogatory term for a probably unattractive woman

end a word to signify that someone or something is the very best; “the living end”

fink a person who cannot be relied upon or trusted, especially someone in the media; a crumb

fracture to make laugh; as in “that fractures me”

gas a great situation; as in “that set was a gas”

gofer someone who performs menial jobs and tasks; “go for drinks”

groove a term of admiration or approval; as in “in the groove”

harvey a person who acts in a stupid or naive fashion; sometimes shortened to “Harv”

hacked angry; as in “he’s hacked off”

hello! a cry of surprise to no one in particular when a beautiful woman is seen

jokes an actor’s lines in a screenplay

little hey-hey romance; a little action with a broad

locked-up as in “all locked-up,” a term for a forthcoming date or engagement, private or public

loser anyone who has made a mess of their life, drinks too much, makes the wrong enemies, etc.

mish-mash similar to loser, but refers specifically to a woman who is messed up

nowhere a term of failure as in “he’s nowhere.”

odds used in connection with important decisions, as in “the odds aren’t right,” meaning it’s a no go

original loser a person without talent; sometimes more fully expressed as “He is the original Major Bowes Amateur Hour loser

pallie dean’s nickname for everyone, whether a lifelong friend or a bellhop

player a man who is a gambler by nature, makes friends easily, and never gives up trying

punks any undesirables, in particular criminals, gangsters, or mobsters

sam used in the same way as Charley for a person whose name has been forgotten, most often applied to females

sharp a person who dresses well and with style

twirl a girl who loves dancing

ville a suffix used to indicate changes in any given situation; examples: endsville, splitsville, etc.

Click here to read more about the Legendary Rat Pack.