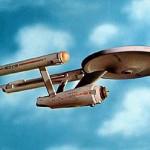 With the J.J. Abrams Star Trek “origins” movie, this significant franchise is getting a much-deserved reboot into the popular consciousness. At the very end of the movie, when Leonard Nimoy recited the famous “Space: the final frontier…” intro and we heard the original TV show theme music, I was suddenly beamed into nostalgia land.

I never considered myself to be a Trekkie, or Trekker, or Trekkist, or whatever you want to call them. Nevertheless, as a kid I made sure to catch every episode of Star Trek because the stories were thought-provoking and just plain fun.

Sure, it was mostly a cheesy, low-budget fantasy show with laughably cheap sets, but Star Trek also featured some high-quality, well-written shows among the occasional mediocre ones. Some episodes were brilliant, some were so-so, but none were totally bad. Even the worst ones had something of interest to offer. Star Trek always made you think, in the same way The Twilight Zone would grab you and turn your usual thought patterns inside out and upside down.

Returning to Yesterday with Star Trek: The Original Series (ST:TOS)

Not too long ago, I was surprised to learn that all 79 episodes of ST:TOS can be found at CBS.com, remastered in Hi-Def with no commercials. And that brings me to a recent revelation. When I found this Trek treasure-trove, it was hard to decide what I should watch. Over the years, I’d seen most of the shows over and over again, but there were some that I had only caught once when they first aired.

Pretty much at random, I played Return to Tomorrow and visited an episode I hadn’t seen in over forty years. From the perspective of an adult, I found this story to be a fine example of the worst and best aspects of the original Star Trek.

The Enterprise comes across a planet that harbors pure-energy remnants of three survivors from a race that had died off half a million years earlier. These aliens seek to “borrow” the bodies of Enterprise crew members (Kirk, Spock and a hot chick) so they can build androids into which they will transfer their non-corporeal consciousness—then they can live again as physical beings. Complications and a corny tragic romance ensue in predictable fashion.

Twenty minutes into this episode, the key Enterprise members are trying to decide if they should comply with the alien’s wishes. All agree to go along except Dr. McCoy who considers the procedure to be unpredictable and far too risky. This prompts Kirk to give the following over-the-top speech, embarrassingly delivered in William Shatner‘s trademark jolting, highly impassioned manner that has endeared him to millions of fans.

“They use to say if mankind could fly, he’d have wings—but he did fly. He discovered he had to. Do you wish that the first Apollo mission hadn’t reached the moon, or that we hadn’t gone on to Mars and then to the nearest star? That’s like saying you wish that you still operated with scalpels and sewed your patients up with catgut like your great-great-great-great grandfather used to. I’m in command. I could order this, but I’m not because Doctor McCoy is right in pointing out the enormous danger potential in any contact with life and intelligence as fantastically advanced as this, but I must also point out that the possibilities—the potential for knowledge and advancement is equally great. Risk! Risk is our business. That’s what this starship is all about. That’s why we’re aboard her. You may dissent without any prejudice. Do I hear a negative vote?”

The Moon Landing is ancient history in Star Trek’s world

Did you catch that reference to “the first Apollo mission”? This show originally aired on February 9, 1968. To the audience at the time, the moon landing had not yet taken place, and it was by no means a sure thing. In fact, we now know that there were serious technical problems encountered during the landing, and it was only the uncanny piloting skills of Neil Armstrong, plus a lot of luck, that avoided a horrible disaster on that momentous day in July, 1969.

But for Captain Kirk, the moon landing was old news, as it is for us today. And this demonstrates the abiding appeal of science fiction that Star Trek brought to a global mass audience. “Risk is our business.” Embrace the possibilities of the future, then some day you can look back and marvel at the wonders that have come to pass.

In many ways, Star Trek showed us what was scientifically feasible—and in some cases, it actually made them come true. It is well-known that the cool futuristic “communicator” inspired the invention of a practical mobile phone (according to its inventor at Motorola, Dr. Martin Cooper). Now let’s get busy with the universal translator, phaser, replicator, transporter, and holo-deck.

Star Trek continues to lead humanity toward a wondrous future. The original series made a significant impression on the Baby Boomers, and the latest incarnation will certainly have a similar impact on Millennials who have never seen Classic Star Trek.

Thank you, Gene (wherever you are), for continuing to portray a positive, exciting vision of humanity’s future. Hey, it looks like maybe I’m really a Trekkie after all. Okay, I can accept that… Beam me aboard!

About the author: Grady Lyda is the creator of MasteringTheNet.com, a website devoted to helping people earn money on the internet. Grady has written and illustrated science fiction comic books, worked as a Marketing & Communications senior graphic designer for hi-tech companies in Southern California, and is a corporate website administrator. Learn how to make the internet work for you.

Top 10 Foods You Should Never Eat