Arts Initiative Kicks Off at Museum of Arts and Sciences 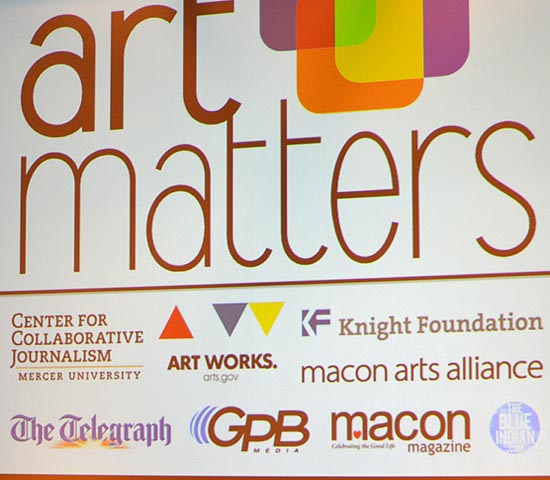 A spirited group of artists, educators, students and writers came together as an arts initiative kicks off at the Museum of Arts and Sciences in October to consider art, its relevance and advancing it. The gathering was the first in a series of symposiums sponsored by Art Matters – an arts journalism partnership of Macon Arts Alliance and Mercer University’s Center for Collaborative Journalism. Visual art and criticism was chosen as the initial topic of discussion.

Discussion centered around emerging trends, changes in the media landscape and new business models for art writing and criticism. Each panelist expounded on their position from personal and professional perspectives. The group covered a lot of ground but the most engaging topic was finding ways to make art matter. Hughes urged artists to use networking as a means of connecting with potential buyers and as a way of staying competitive and relevant. “These methodologies afford artists the opportunity to directly impact the public and heighten their awareness and interest in art,” suggested Hughes.

One highlight of the gathering was the Question and Answer session between the featured panelists and members of the audience. Views emanating from those in attendance proved to be as thought provoking and provocative as those coming from the stage. Said one audience member, “there has to be a deeper level of engagement,” referring to what he described as a lack of commitment from the public and especially leadership (government, business, etc.) towards making art a greater priority than it currently is.  Murray suggested that a reduction of distractions is essential to getting people more interested in art again. “Make art a personal crusade, so that it doesn’t become an isolated medium,” pleaded Murray. Another gentlemen said that priorities have to change. “Money matters more now than art. To me it’s now incumbent upon us to make art matter more than it currently does,” he expressed.

In between the sharing of personal opinions talk of art critics, getting into galleries and the promotion of art took place. And as the conversation neared its end, Reese expressed her desire for the medium to be a bridge builder between the haves and the have nots. “My hope is that we can get the top to meet the bottom somewhere in the middle to the benefit of all.”